Today is my last full day in Lisbon. The last area we explored was the Alfama district, the oldest district in Lisbon. There are many important buildings in this district including: Lisbon Cathedral, Castelo de S. Jorge, National Panthenon, and St. Antony's Church. The district can be reached in 2 ways. One, taking tram 15E or the famous 28 tram. The other way is by your own will-power walking up the steep hill of the district. I took tram 15E from Paça Figueira square, located near Rossio Train Station, to Largo das Portas do Sol Station. Don't worry if you don't know where to get off, just get off at the station everyone else gets off.

💡Tip: Start your day early, especially during the weekends. Tram 28 tends to be more popular than 15E. Both takes you to the same location.
After getting off the tram (15E) at the top of the hill, you will be struck with the amazing view of the Alfama district. There are two view points where you can capture the panoramic view of the district. Portas Do Sol and Miradouro de Santa Luzia, both with the same panoramic view in slightly different angle. I prefer Miradouro de Santa Luzia because there is a little balcony-like sitting area to enjoy the view.

Next we head up the hill toward Castelo de S. Jorge (St. Jorge Castle). The castle has been standing on the hill for more than 400 years. However, most of the castle has been restored during the 1920s, so not everything is original, but it's still charming. Entrance fee was €8.50 for adult. Unfortunately, I didn't get to go inside. I'll definitely comeback for it when I get a chance. In the castle you can get an even better panoramic view of Lisbon.
I walked around the area surrounding the castle. The castle is surrounded by many colorful houses. I could spend literally hours here admiring the houses here, especially the doors and decorations. Unlike other cities, houses here are painted in pastel tone color. Some houses were also decorated with colorful tiles. 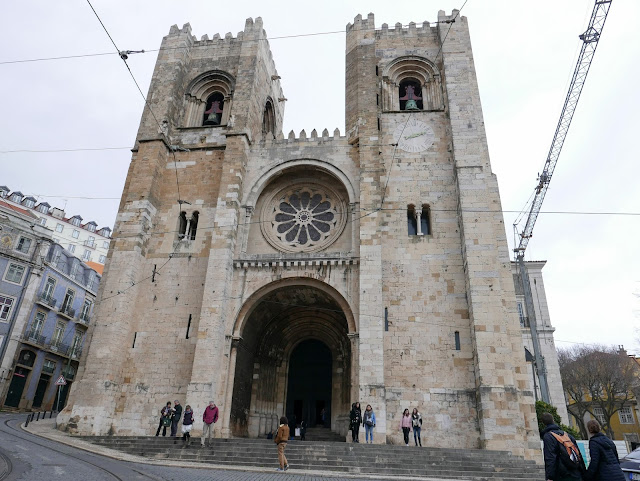 As you descent down from the top of the hill you will find Lisbon Cathedral. This is the oldest church in Lisbon. The church has gone through many reconstruction due to earthquakes that happen in Lisbon.
Just about a 5 minute walk from the Cathedral, we reached the main plaza area, Praça do Comércio. In the past this plaza serves as the main trading plaza for merchants. In the middle of the plaza is the status of King José. Behind the status is the Arco da Rua Augusta arch. Pass the arch is the main shopping street of Lisbon. We moved our accommodation today to be close to the red metro line, which runs directly to the airport. Our plane was at 10:00am the next day.

Egg Tarts
Ranking:
Note: These are my personal opinion. I only tried 4 different bakery.

Pastéis de Belém
The egg tart here is the least sweet among the 4 places. It has a thick and crunchy outer crust. The inside custard has slightly firm texture. This bakery comes in first because of its not-too-sweet custard filling.
Fábrica da Nata
This bakery's egg tart has a thinner flaky crust compare to the above bakery, the custard is also slightly runnier. The crust here has a light salty taste which cuts down the sweetness of the custard.
Manteigaria Fábrica de Pastéis de Nata
This bakery adds cinnamon to their custard. The crust is similar to Pastéis de Belém, thick and crunchy. This bakery came in third because its was slightly too sweet for my taste but I really liked the cinnamon in the custard filling.
Confeitaria Nacional
This bakery's egg tart is the sweetest out of all the bakery on the list, hence it's 4th place.

Popular posts from this blog

March 02, 2017
Last year in April, I visited Kansai region for the second time. The first time I visited the Japan was almost 10 years ago with a guided tour. This time, I'm back on my own (with a friend), traveling through Kyoto, Otsu, Nara, Kobe, and Osaka for 10 days. I arrived at the end of the cherry blossom season and right before Japan's big holiday, Golden Week. Yes, it was intentional, I wanted to avoid the crowd of tourist coming to see the cherry blossom in the area and also avoid the crowd of locals traveling on their holiday.

Kansai Region is located to the southwest of Tokyo. It consist of 7 prefecture (equivalent of a district). The 4 biggest cities in the region are Kyoto, Osaka, Kobe and Nara. Kyoto was the old capital of Japan from 794 to 1868 until it was moved to Tokyo. Osaka is the second largest area second to Tokyo. Nara was Japan's first permanent capital, established in the year 710. Being the first permanent capital of Japan, many of Japan…
Post a Comment
Read more

February 05, 2017
Right after our brutal 2 week exam period, me and my friend hop on a flight to Lisbon. My main motive for visiting Lisbon was for my initial love for egg tart (Pastel de Nata). We escaped the 3℃ (37℉) weather of Manchester, UK to the lovely 16℃ (60℉) winter in Lisbon.

After getting through the airport we got ourselves a rechargeable transportation card and hop on the bus heading to city center. The airport was only about 6 miles from city center and it can be reached through either bus, city bus, or the metro. In our case, bus was the cheapest (€1.40) and the fastest (around 15 minutes). After finishing lunch we visited Miradouro de Sãopedro de Alcântara, one of the many view point in Lisbon. Here you can get a clear view of the whole city specially the Alfama Neighbourhood.

💡Tip: For those planning to use public transportation to get around, I would recommend getting the rechargeable transportation card, which cost €.50 to purchase. This will save you time and money in the lon…
1 comment
Read more