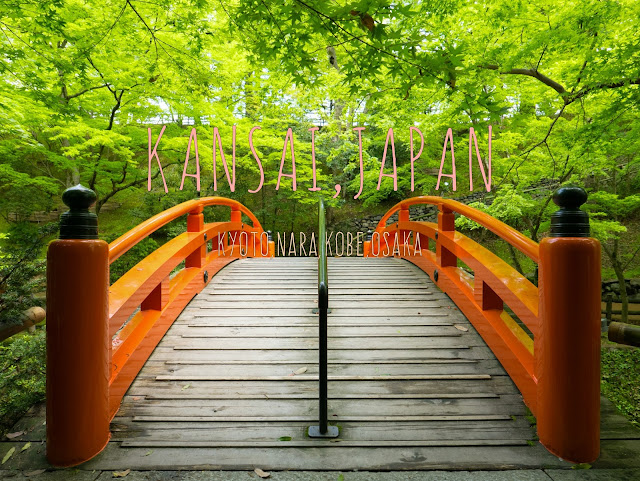 Last year in April, I visited Kansai region for the second time. The first time I visited the Japan was almost 10 years ago with a guided tour. This time, I'm back on my own (with a friend), traveling through Kyoto, Otsu, Nara, Kobe, and Osaka for 10 days. I arrived at the end of the cherry blossom season and right before Japan's big holiday, Golden Week. Yes, it was intentional, I wanted to avoid the crowd of tourist coming to see the cherry blossom in the area and also avoid the crowd of locals traveling on their holiday.

Kansai Region is located to the southwest of Tokyo. It consist of 7 prefecture (equivalent of a district). The 4 biggest cities in the region are Kyoto, Osaka, Kobe and Nara. Kyoto was the old capital of Japan from 794 to 1868 until it was moved to Tokyo. Osaka is the second largest area second to Tokyo. Nara was Japan's first permanent capital, established in the year 710. Being the first permanent capital of Japan, many of Japan's oldest and largest temples can be found here. Kobe is one of Japan's top 10 largest cities. Kobe is a port city, among the first to be open to foreign traders in the 19th century (Source). Kansai Region is known for its well preserved nature. The region has more UNESCO World Heritage listing than any region in Japan.

There are many, I repeat MANY different kind of passes for your convenient travel in the Kansai region. Japan-guide.com will list the different passes you could purchase for travel in this region. However, I would have to say that getting these passes won't guarantee that you would save money. You would need a clear plan of your travel in the region and a lot of research on transportation in the area.

For instance,  I mostly stayed in Kyoto and Osaka during my travel, I did some research on public transportation in those two cities. I researched how to get around the cities and the available passes I could purchase. I have compiled some of the passes that would be of use during my travel below. Note that I did not use all of these passes.


For getting to any of the 4 cities from the airport I recommend getting the Icoca Haruka Package 1-way ticket which comes with the train ticket from Kansai Airport to any of the 4 major cities and a ¥2000 yen loaded Icoca (Kansai area reloadable transportation card). This pass can be purchased from the JR office located at the train station across from the airport. Note that the price in the chart is for trips from Kansai airport (KIX) to Kyoto. Prices for other cities varies. More information on this pass can be found Here.

For those of you who plans to travel to multiple cities I recommend getting the Kansai-Thru pass. Depending on how many cities you are planning to visit you can either get the 2 day or the 3 day pass. The pass can be use on trains and buses in Kansai area. You could also use it as a discount to enter 350 major tourist attraction in the region. One good thing about this pass is you can use it on non-consecutive days. What do I mean by non-consecutive days? With most multiple day passes, once you activate it, it is valid for the number of days you purchase it (ie. 3-day pass, you activate it on Monday, it will be valid from Monday, Tuesday and Wednesday). However, with non-consecutive, lets say you bought the 3-day pass, you could choose which 3 days you want to active and use it (you can activate it on Monday, Wednesday, Friday). The pass can be purchased from inside the airport (after arrivals) or at the local tourist centers. I would only advice you to buy this pass when you have a clear plan of your visit, and that you plan to visit more than 1 city.

In Kyoto, I would recommend getting the Kyoto 1-Day bus pass. This can be purchased from the tourist center located in from of Kyoto train station. The bus system in Kyoto is well developed and major attractions can be reached by bus. Map of Kyoto bus here. The pass is worth getting if you plan to take the bus more than 3 times. The normal city bus ticket cost ¥230 per trip. However, there is a limit to the pass; the pass is not valid on rural buses and only valid on city bus routes within in the red line (refer to the bus map).

For Osaka, I recommend getting the 1-Day Enjoy Eco-Card. This card can be purchased from the subway station ticket machine. The pass cost ¥800 on weekday and ¥600 on weekends. You could use in on any of Osaka's 8 subway line and bus system for 1 day. Opposite of Kyoto, Osaka's major attraction can be reached through the subway. Subway fare depends the distance you will be traveling, fare ranges from ¥180 for zone 1 to ¥370 for zone 5. The subway map in the station will tell you how much your fare will be to get to your destination. Information on Osaka's transportation system is here.

In Kobe, there is a designated city bus that runs through all the major attraction in the city. The city bus has a tour-guide on board that give you information about each attractions. Individual ticket for each trip cost ¥260 and can be purchased from the tour-guide on the bus. The 1-day pass, which allows you unlimited trips on the bus for 1 day, cost ¥660. The pass is worth it if you plan to visit 3 or more stops on the map.


Finally, for those of you who plan to travel to the airport from Osaka, I recommend getting the "Kansai Airport Rapi:t" ticket. This is a ticket to or from Kansai Airport from Namba Train Station. This ticket can be purchased at Nankai Namba Service office (2F) for ¥1,130. Or you could also get the "Osaka City Subway to Kansai Int'l Airport" for ¥1,000. This ticket can be purchase from any ticket machine in Osaka.

Noting again that in order to make good use of these passes, you need a clear plan of each day you are traveling in the area. To make it simple, you have to out-smart these passes☺. Also these are passes I've found useful for my trip, this may vary according to your own trip.

💡Note: Some of the discount passes are not available for purchase inside Japan, or is more expensive when you purchase them here. Please check before you depart.

💡 Tip: The Shinkansen is not needed if you are planning to travel in this region. There are plenty of local train connecting you to different cities in the area.

❓Help: If you have further questions about transportation or planning, please leave me a question/message.☺

Popular posts from this blog

February 05, 2017
Right after our brutal 2 week exam period, me and my friend hop on a flight to Lisbon. My main motive for visiting Lisbon was for my initial love for egg tart (Pastel de Nata). We escaped the 3℃ (37℉) weather of Manchester, UK to the lovely 16℃ (60℉) winter in Lisbon.

After getting through the airport we got ourselves a rechargeable transportation card and hop on the bus heading to city center. The airport was only about 6 miles from city center and it can be reached through either bus, city bus, or the metro. In our case, bus was the cheapest (€1.40) and the fastest (around 15 minutes). After finishing lunch we visited Miradouro de Sãopedro de Alcântara, one of the many view point in Lisbon. Here you can get a clear view of the whole city specially the Alfama Neighbourhood.

💡Tip: For those planning to use public transportation to get around, I would recommend getting the rechargeable transportation card, which cost €.50 to purchase. This will save you time and money in the lon…
1 comment
Read more


Today is my last full day in Lisbon. The last area we explored was the Alfama district, the oldest district in Lisbon. There are many important buildings in this district including: Lisbon Cathedral, Castelo de S. Jorge, National Panthenon, and St. Antony's Church. The district can be reached in 2 ways. One, taking tram 15E or the famous 28 tram. The other way is by your own will-power walking up the steep hill of the district. I took tram 15E from Paça Figueira square, located near Rossio Train Station, to Largo das Portas do Sol Station. Don't worry if you don't know where to get off, just get off at the station everyone else gets off.
💡Tip: Start your day early, especially during the weekends. Tram 28 tends to be more popular than 15E. Both takes you to the same location.  After getting off the tram (15E) at the top of the hill, you will be struck with the amazing view of the Alfama district. There are two view points where you can capture the panoramic view of th…
Post a Comment
Read more